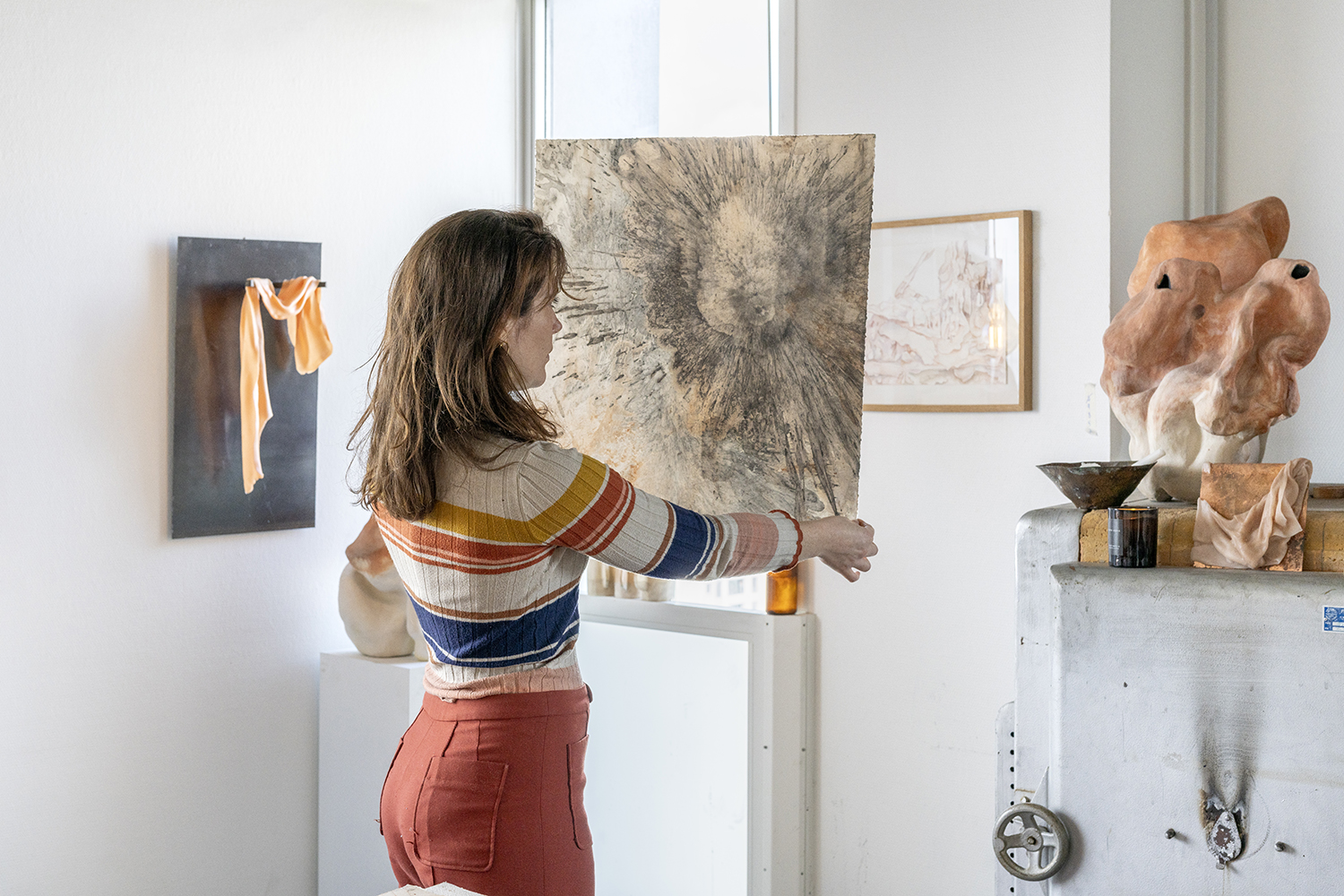 « Each image carries within itself the traces of other images. In the event of its emergence, its untimely irruption, the image, even if shockingly novel, is always weighted and loaded by a mythical memory. Thus, all debates on the genesis of the artwork are strained between two poles. On one part, the myth, the community, the Law; on the other part, the imagination, the singularity, the event. »

A material is at the core of everything: wax. Plastic, sheer, fragile, polymorphic, sensual or even carnal, it is also symbolic: associated with light, promises and wishes when used for ex-votos, divination and witchcraft, death or memory of the deceased whose features are modeled on mortuary masks as if to reach eternity, the passage of the soul to the after-life when the candle burns out, the rebirth of the mummified body in ancient Egypt…Matter becomes form, sign as well as symbol. It is however its ability to transform and shift between the various states of matter —from liquefaction to solidification, using the 4 elements: fire, water, air and earth—, that is its alchemical dimension, which echoes Juliette Minchin’s work process. The monumental pieces created for her exhibitions are usually destroyed, recycled, melted and merged with the matrix which contains a field of possibilities and from which other artworks-to-be are formed. Not unlike the primordial chaos from which arises the demiurge ready to shape the world, this undetermined space includes both the created and the uncreated, motion and stillness, light and darkness, the masculine and the feminine principles, the yang and the yin in the oriental thought. Wax returns to wax with, in between, the spark of creation which punctuates a long and initiatory-looking path, a quest nurtured by archeology, anthropology and ethnology. Juliette Minchin is interested in universal concepts shared by several cultures, hence putting humanity into perspective. In her work, the process set in motion is as important as the achieved artwork; creation and destruction are two sides of the same coin enriched by a creative energy, a “magical” charge —one could even be tempted to add: a soul. A multifaceted and endless work, not unlike a living organism.

Since she started using this type of wax 3 years ago, the volume of her “matrix” has barely changed, 400 kgs. The flesh-like, skin-like material draped on architectural skeletons go back to the “void”, waiting to take shape for a new project. Except for a few exceptions, like the drapery-subjects of the photograms created for Dilecta’s exhibition. Set aside, sufficiently mysterious and grasping the accuracy of a motion infused with coincidence, those pieces remain in the workshop, privileged; rejoining the cycle of creation differently thanks to another core element of Juliette Minchin’s work: light. It passes through the draperies of more or less dense wax and imprints the photosensitive paper in order to create a troubling image, a kind of eerie veil where layers of transparency and opacity are overlapped. A cryptic breath. Crystalizing light is another way to materialize a movement and to give shape to moments of suspended time. 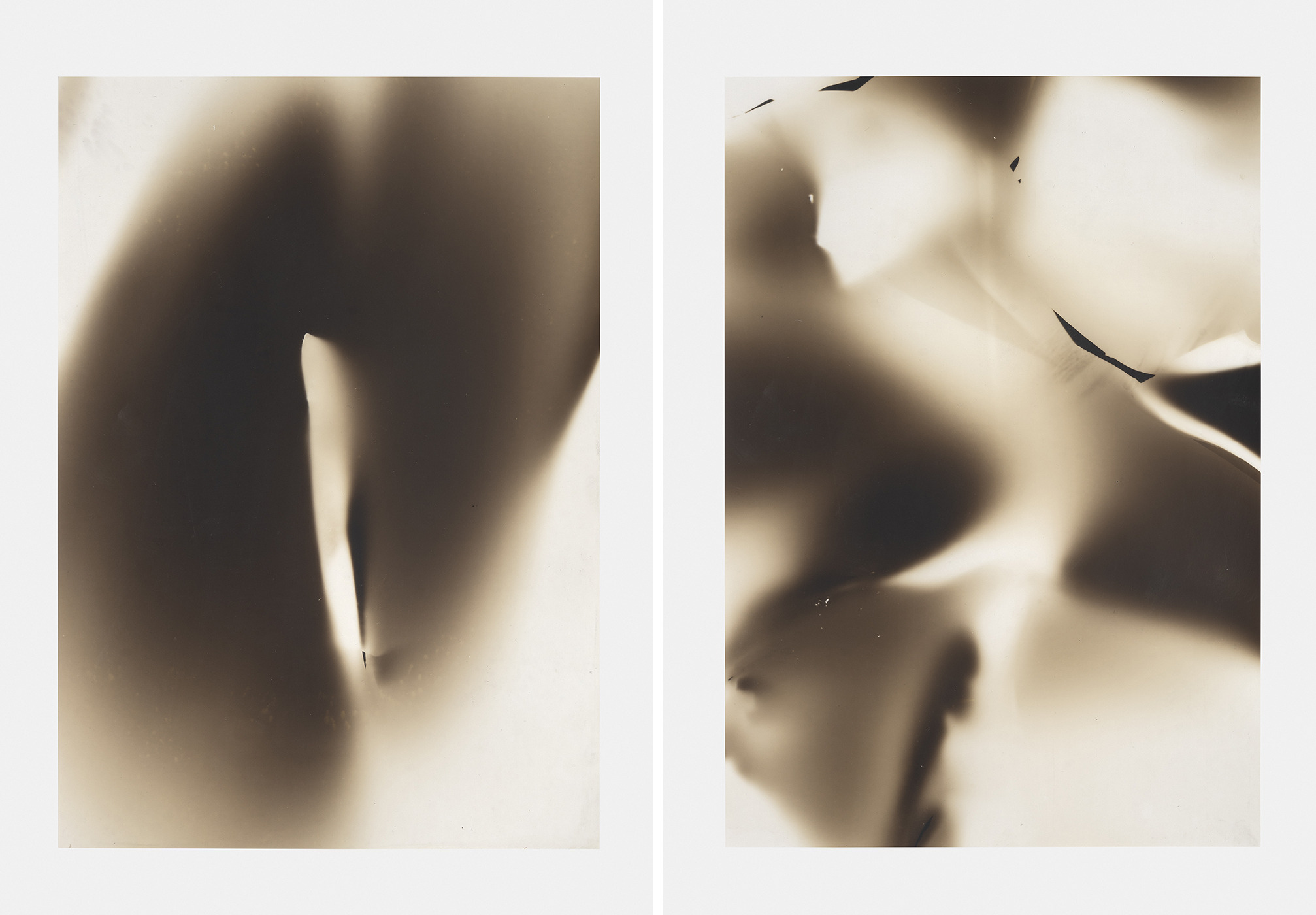 A piece of the cosmos

The wax drawings refer, for their part, to another experiment as she herself explains: “At first, I put soot which I scratched from a burnt piece of wood I brought back from Sicily (where I did a significant artist residency) and mix it with graphite, charcoal and Armenian pigments. After actively projecting water onto the surface, I wash out the paper which I soak in wax. Once fixed, I scratch the surface after warming it with a hair-dryer, rendering the paper translucent.” Contrary to her baroque draperies, those flat sheets are like tight and tanned hides in which, once backlit, lines of an imaginary chiromancy or the bursts of light from fictive fireworks can be seen. She expresses sparkles, blasts, little pieces of the cosmos. In this series, entitled “Hydromancie” [Hydromancy], she co-creates with water, the natural element driving the dynamic of the stroke, whereas in the series of photograms —the “Cérogrammes”— it is the light which forms the image. “In the photograms, the darkness materializes the places where the light passes through while in the drawings, it is the opposite, it’s the water which creates the image. Like fireworks, the yang illuminates the yin. Light passes through darkness.” In both cases, time stops simply to seize something elusive which would have been missed if the artwork wasn’t keeping track of it.