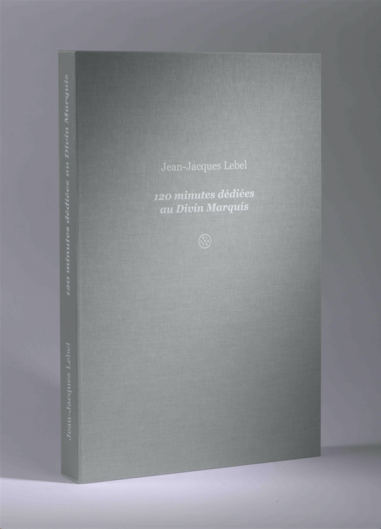 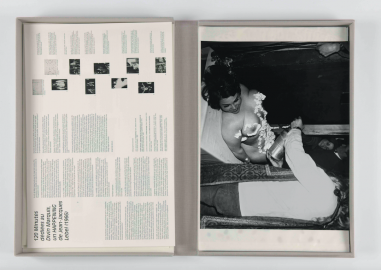 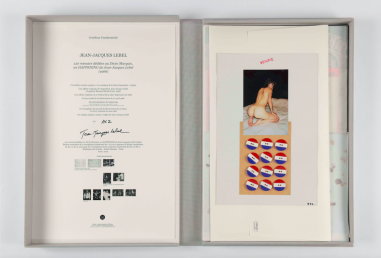 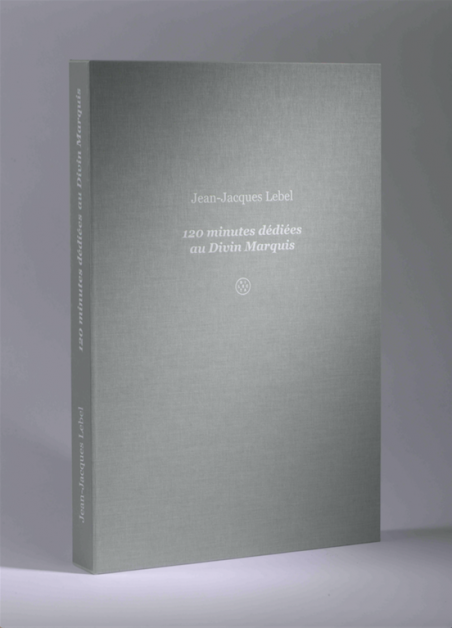 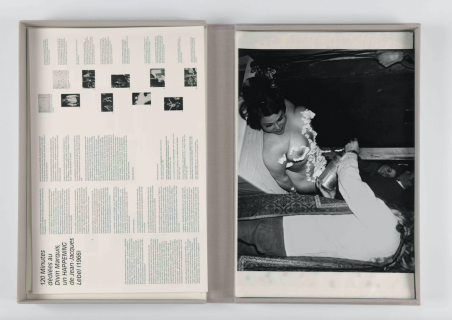 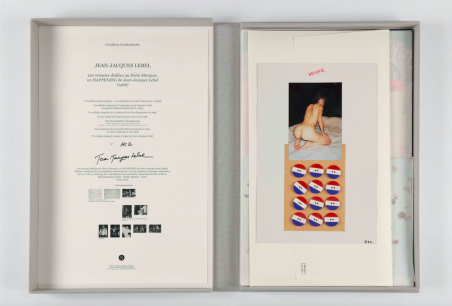 1966 - 2019
Portfolio that collates various archive documents from the happening that took place at the initiative of Jean-Jacques Lebel in Paris in the spring of 1966.
33 × 50.5 cm
Ed. 9 + 3 AP + 2 NC
In a grey canvas box with embossed white lettering created by the Atelier Martial in Paris.

1966 - 2019
Portfolio that collates various archive documents from the happening that took place at the initiative of Jean-Jacques Lebel in Paris in the spring of 1966.
33 × 50.5 cm
Ed. 9 + 3 AP + 2 NC
In a grey canvas box with embossed white lettering created by the Atelier Martial in Paris.

Among the ten photographs we find documents conserved by Jean-Jacques Lebel, such as the handwritten synopsis required to organise the 120 minutes or photographs by Manuel Bidermanas, Horace and François Massal, all of whom were witnesses and participants in this happening. They were some of the hundreds of more-or-less anonymous participants, since the likes of Ben, Daniel Spoerri, Harry Shunk and János Kender, Ornette Coleman, Edgar Morin and Daniel Pommereulle were also in attendance. This photographic collection recounts the development of the historic happening that took place at the Théâtre de la Chimère (9th arrondissement in Paris), in the building where André Breton lived, and these photographs were designed to isolate and record key moments.

A text accompanies the portfolio and its various documents, evoking the political implications of the happening – the “infraction” – of 4 April 1966. 120 minutes dédiées au Divin Marquis is a clear tribute to the Marquis de Sade and his work, in which “Sade becomes the means of testing the limits of censorship.”1

It is important not to gloss over the content of this happening, a true form of action art, which we know mainly through its predominantly American, apolitical dimension. 120 minutes dédiées au Divin Marquis “pushed the political meaning of happenings to an unrivalled point of expression,” leading it to be characterised as a “scandal”.
For the third Festival de la Libre Expression, which was held in April 1966, Lebel contributed his tribe of artist-activists and a happening entitled 120 minutes dédiées au Divin Marquis at the Théâtre de la Chimère. He expanded on the orgiastic and political themes explored in Déchirex. The process of initiation, which was at the heart of the festival, began from the entrance: the members of the public were brought in via the artists’ entrance between two bloody meat carcasses, “as though inside a vagina giving birth”. This abject intro- duction led to a space lit with stroboscopic lighting, free-jazz music, and surrealist photographs, reinforced by the distribution of sugar lumps imbibed with LSD. Certain aspects of the improvisations con- fronted the body and politics. The happening created an autonomous space in which the volunteer-participants were free to choose their own activities. Among the participants were Denise de Casabianca, editor of Jacques Rivette’s film La Religieuse (censored during that month of April 1966) and Cynthia, a transsexual prostitute work- ing in Pigalle, whose role was central. Cynthia sodomised herself with vegetables before confronting the public naked and exposing her transsexuality to all. This complete and frontal nudity caused a sensation. The happening was deemed obscene and interrupted by the police.2

The subversive consequence of this event was affirmed by the 27 April 1966 Déclaration, a document of exceptional importance given its signataries: André Breton, Jean-Paul Sartre, Simone de Beauvoir, Michel Leiris, among others.

This portfolio reasserts the roles assumed by Jean-Jacques Lebel and the 120 minutes dédiées au Divin Marquis in the history of the 20th-century art.