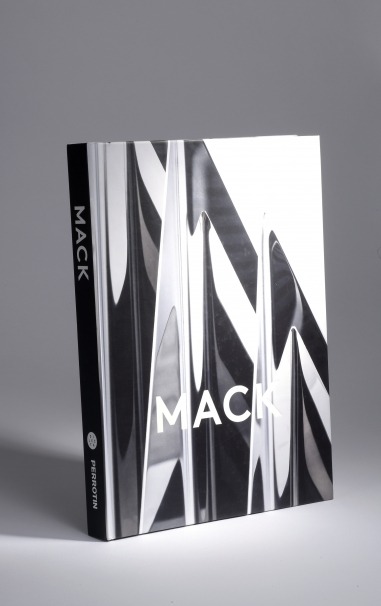 Éditions Dilecta presents a collaboration with  Perrotin Gallery in publishing a restropective show of the major from the German scene from the second half of the 20th century.

Heinz Mack's career began in 1950 at the Düsseldorf Academy of Fine Arts, which was still in the process of reconstruction, where he did his first graphic research and discovered the historical avant-gardes. After studying philosophy at the University of Cologne from 1953 to 1955, he made many trips to the Sahara where his achievements in 1962 foreshadowed land art. 1957-1966 was a landmark period: Heinz Mack was, with Otto Piene then Günther Uecker (who joined in 1962), the founder and central actor of ZERO, an artistic entity with variable geometry that reform the very principle of abstract art in the light of monochrome painting, movement, phenomenology and cognitive science, not forgetting the 1970s and 1980s, during which many of his sculptures, which are often monumental, integrate the German urban space. On his business card, Heinz Mack presents himself as a "sculptor and painter". The order of these mentions is important: it favors the modulation of matter in space on the creation of images on the surface of the painting. In other words, even the canvases that the artist tends to frame in the mid-1950s are covered with a material whose abundant impasto draws them to this intermediate area of art history, located between painting and painting. sculpture, that is the relief. These reliefs, in turn, are strictly speaking wall sculptures, that is to say that their elements form a substantial projection relative to the plane on which they are fixed. As sculptures in the round, they are usually made of traditional materials (paint, metal, wood, stone, glass, plexiglass, plaster or sand) and treated with workshop tools that are just as much. However, against all odds in view of this material and technical description, their appearance remains elusive, any mental or photographic fixation seems impossible. This appearance, therefore, consists of an incessant perceptual play with light and real space. Matter seems literally consumed by games of reflection and the work exists only in a double movement of appearance and disappearance. This is a paradox, inseparable from the history of kinetics and perceptual art, of which Heinz Mack was a central actor, between the evidence of the material fact and the complexity of its effects. The same tension applies to the arborescence of the artist's life, which can not be approached with fidelity from a fixed point of view or from a central perspective. Matthieu Poirier

"I have always looked for simplicity because the world is overflowing with images and they only bring confusion. But this simplification, he specified, can not be assimilated to impoverishment: it produces energy." - Heinz Mack

€33.18
Tap to zoom
You need to login or create account