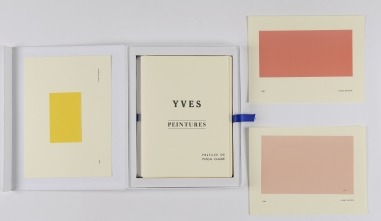 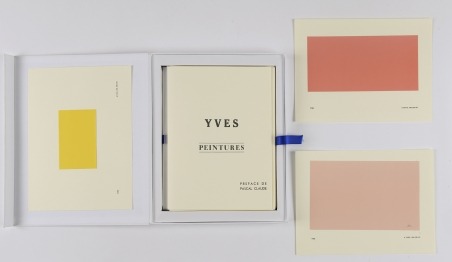 Exceptional facsimile re-issued to format and on the original paper.
In May, 1954, Yves Klein released only a few copies of Yves Peintures. This collection of monochromes has become so hard to find nowadays that it has been considered legendary...

In May, 1954, Yves Klein released only a few copies of Yves Peintures. This collection of monochromes has become so hard to find nowadays that it has been considered legendary. At the time it was produced and edited by Fernando Franco’s engraving workshop in Madrid. The preface, written by Pascal Claude, is composed of black lines instead of text. The ten rectangular plates are cut out of monochromatic paper and alongside with their graduated dimensions and captioned with a city’s name (Madrid, Nice, Tokyo, Paris).

This publication is considered as the first public gesture of Yves Klein as an artist. Through this piece, Yves Klein questions the idea of reproduction in art.

“Last night, on Wednesday, we went in an abstracts’ cafe […], the abstracts were there. They’re easy to recognize because they exhale of an abstract painting atmosphere and we see their paintings in their eyes. Maybe I am under some illusions, but I feel like I can see all of that. In any case, we were sitting with them […]. We got around to talking about the book Yves Peintures. Later, I went to get it from the car and threw it on the table. By the first few pages, the eyes of the abstracts had already changed. Their eyes lit up and in their depths appeared beautiful and pure unified colors.”

40 pages. Format 19 x 24.5 cm. Presented in a paper box and goldembossed.
Issued in a limited, numbered edition of 400 along with certificate from the Yves Klein Archives.

The Memorial, an Architectural...