Like a tribute to Mother Nature, this exhibition focuses on questioning humankind on its part in the gradual yet drastic annihilation of the planet; not only of its fauna and flora but also of what affects humanity in its flesh and psyche. A slow and progressive suicide which cripples day after day the beauty of the divine so perfectly described by Spinoza and so accurately embodied almost a century and a half ago by the artist Albrecht Dürer in a simple but uprooted tussocks of weed paradoxically rendered immortal by his mastery of watercolor.
The purpose of the chosen artworks was to sublimate nature by alternately showing it as delicate, mighty or threatening but also as incongruous, disturbing or simply beautiful.
Throughout various techniques such as drawing, painting, sculpture or even photography, one is invited to marvel in front of those gracious greeneries and other parts of nature in which the artists found some type of inspiration in order to better share their sensations, worries or other feelings such as bliss.
Dilecta’s exhibition is rooted in a specific tuft of weeds, a watercolor executed by Dürer in 1503. While observing and studying with precision this masterpiece, another interpretation than the botanical one emerged: the divine suddenly takes shape in front of our very eyes. Its author sacrificed the model in order to permanently ensure the veracity of the naturalist and humanist vision: by uprooting the plant, he could better observe it and thus depict it. Dying in order to reach immortality: such is the insoluble paradox at the core of this collective exhibit in which the human figure is, voluntarily, mostly absent except for a lone character. This naked and huddled shape, lost in the wildness, is portrayed by Nicolas Dhervillers in his wide photograph. Entitled Uncertain Fates, this artwork begins our immersion into a theme mostly floral in which humanity is however central and crucial. Crucial indeed since the fate of nature – if it will be allowed, or not, to thrive – is inextricably tied to mankind. In the center of the artist’s composition, a fetus-looking woman appears in an environment more organic than vegetal, a nature which has given birth to humanity and is yet now threatened of extinction by her own children.

In our ideal, perhaps patrimonial, herbarium, are pinned Gaël Davrinche’s creations: large pantomime flowers seem to struggle against an uncontrolled, hostile and merciless wind. Featured alongside are the watercolor flowers from the workshop of Pierre-Joseph Redouté, one of the greatest master in this field, dating from the 19th century; a period in art history to which Benoît Blanchard, with his gray anemones, pays a subtle tribute – and more specifically, to Phillip Otto Runge’s Germany. A sumptuous set of twelve sheets forming an invented herbarium by Anne and Patrick Poirier and inspired by the pages of Ulysses’ journal, an historiated composition by Brodbeck and de Barbuat, Josué Comoe’s flowers with a metallic glow as well as two illuminations from the 15th century complete this chlorophyll journey.
Mircea Cantor, using a brush and black ink, gives to his bees something to fulfill their queen – and us at the same time. In perfect symbiosis, Morgane Tschiember’s honey drops in three dimensions will turn out to be a real treat.

Concerning Philippe Cognée and Sebastian Cramer’s flowers, do they truly still belong to the plant world? Only you can judge whether their more organic aspect is unsettling or not.
The resurgence of lightness comes from Wang Suo Yuan’s tondo and its cosmic rendition which takes us on a journey of the mind, far away from our first impressions. We are also invited to wander through parallel universes, to get lost in the eery yet ecstatic collages born from Frédéric Leduc’s imagination.
Other compositions are to discover. Under their apparent classical forms, those artworks may be more poisonous and troubling than they appear, as with Damien Cadio’s painting, the oil on canvas from 1881 by Alfrida Baadsgaard or these two obscure photographs by Nicolas Dhervillers.
In Théo Mercier and Bruno Peinado’s objects, great importance is also attached to Nature in its most quirky and unexpected aspects. And sometimes, to the classicism of a mere plant pot brilliantly rooted by Maxime Biou is grafted a specific staging meant to question us on the place of artworks in our formal and conventional field of vision.
A nature which lives alongside and surrounds the human world is also evoked in Valérie Sonnier and Marine Aballéa’s works: both graphic and ghostly.
Finally, Nature in all that she has of purest and most classic is honored in Eric Poitevin’s photographs whose dead stag and weeds complete with gravity and grace this exhibition entitled La Nature faite pour Dürer [Nature made for Dürer]. When humanity pay tribute to its nourishing mother. . . it’s over and over again. 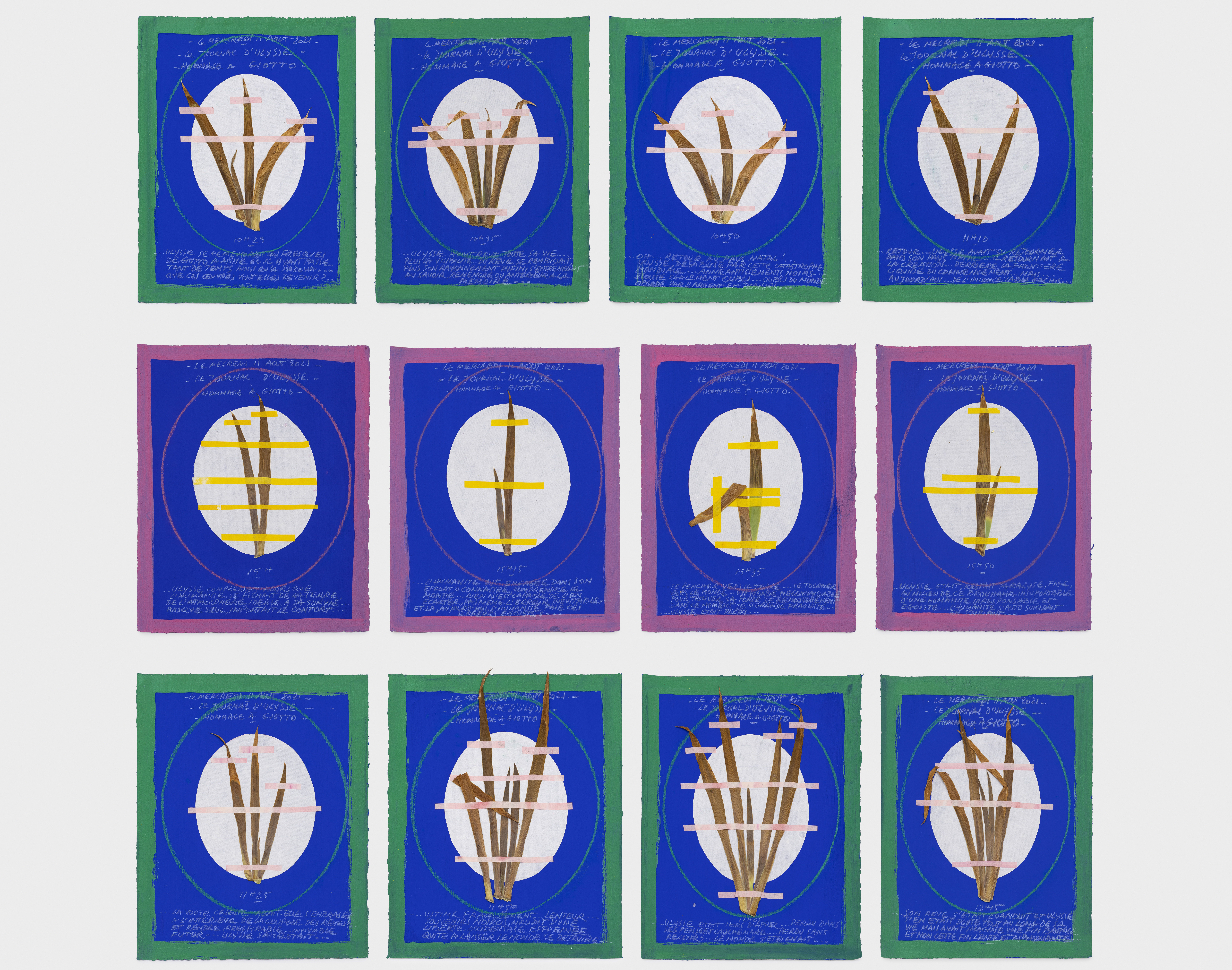