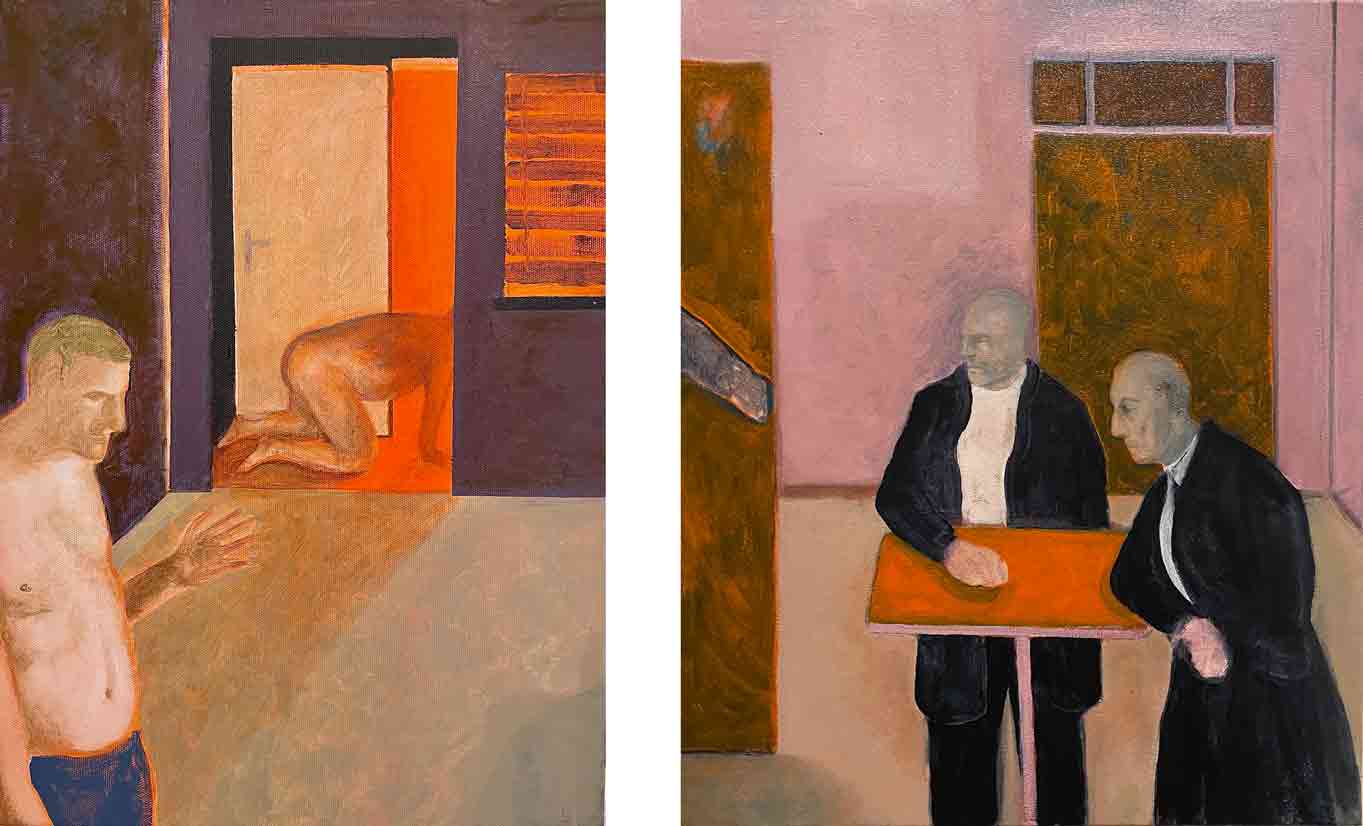 « The end is in the beginning and yet you go on »

Interiors made up of a few pieces of furniture - a chair, a bed, a table, a neon sign, shutters. Reduced to the essential, Jean Gfeller's sets unfold like archetypes of familiar places, homes, bedrooms, even waiting rooms. Ambivalent, they shape a small labyrinthine theater where doors and windows offer no escape. They are nothing more than pieces of colors that surround, frame, structure, partition the space and the figures that remain in residence. When vanishing lines are drawn, they often lead to blind spots, corners of walls that interrupt any possibility of crossing. When a landscape opens, it is only a decoy, a flat image facing us. The scenes oscillating between interior and exterior take place behind closed doors, trapped in the paintings that expose them. Bodies are revealed, motionless or immobilized in their action, frozen in unresolved situations. They crystallize a moment of tension, a moment of latency and its anguishing reverse. Inhabiting these stripped places of which one does not know if they are the vestiges of a world in decrepitude or the beginning of another one in emergence, these characters appear like paradoxes, entangled in liminal zones. If they seem to trigger a narrative, they do not activate the phrasing, cloistered in their mutism.

Jean Gfeller's new paintings, gathered in his first solo exhibition "A neck bracelet, a weird guy and a landscape poster", at the Dilecta gallery, are colored by an endgame atmosphere - an echo of Samuel Beckett's eponymous play. In the incipit of the latter, the protagonists find themselves walled up in a closed space where only two windows remain, accessible only by a ladder. If the outside exists, it remains physically unreachable, reduced to two distant images like two variables of the same world in crisis, two outcomes for an undetermined end. This theater of the absurd inviting to reflect on the planetary turbulences, without being a reference for the painter, ricochets on his staging. The figures that he draws, solitary or in group, anonymous or of the order of possible alter egos, offer themselves in their indecision. It is a repertory of characters, or perhaps only one character with multiple faces, designating a common humanity in dereliction that the artist enjoys making fun of. Locked up, mistreated, they appear sometimes awkward, with a strange look, sometimes numb with boredom. Rarely do they face us, and when they do, their suits and neck braces show the weight of their obligations. The rudimentary space that isolates them offers the possibility of "breaking the narrative, preventing the illustration, freeing the Figure: [to] stick to the fact », as Gilles Deleuze analyzes Francis Bacon's work. It is a question of understanding a painting that leaves the narrative in the state of external rustlings because its language is not that of words, but that of color. 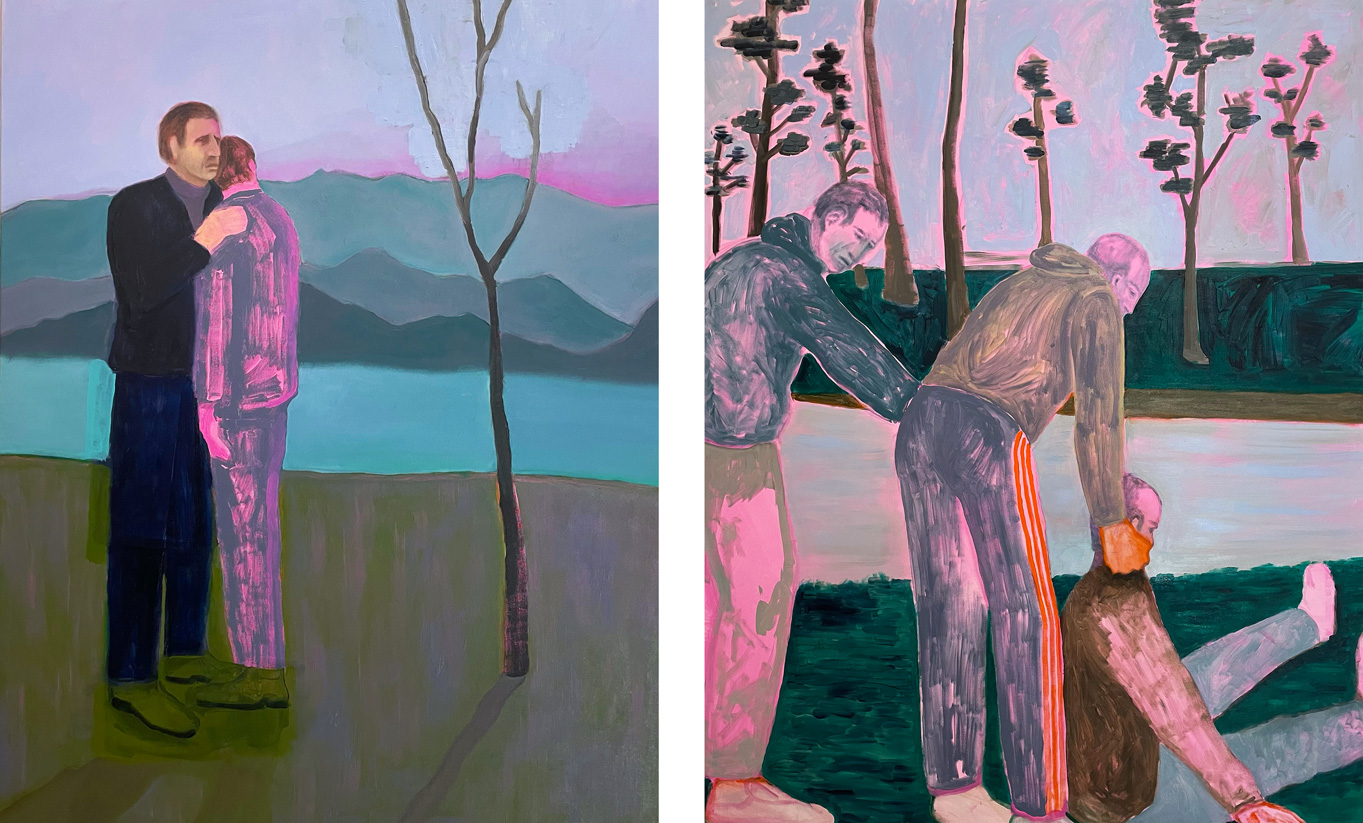 Virginia Woolf, in a fictitious dialogue between guests around the visit of an exhibition of Walter Sickert, ends up asking an essential question:
"What is an image when it has rid itself of the companionship of language? While stating that it is "difficult to look at his paintings without thinking of a plot", the author intends that they plunge into “the realm of silence"3. Francis Bacon in turn explores this path, refusing to consider the tormented figures he depicts as narrative. If they can inform of the artist's life, they escape any univocal interpretation. Their solitude, their compartmentalization in colored flat tints or cages, their flow through siphons, for example, designate the place that embodies them and assigns them residence: painting. The work of the Irish master is a lasting companion for Jean Gfeller, who keeps one of his monographs in his studio, which he sometimes uses as a palette or flips through to retain a detail of composition or a particular chromatic accord. In the register of references, we also find the German expressionists retained for the free use of colors and the singular use of the woodcut, or the work of Edward Hopper in his approach to light. These anchors, among others, nourish in hollow his paintings which nevertheless seek neither homage nor quotation. It is rather a question of opening new formal possibilities and experimenting. He thus approaches painting in an intuitive way, first laying down large colored masses which, through a game of superimposed layers, between opacity and transparency, illuminate the scenes they support from the background. Through these overlaps, the artist assumes and enjoys the accident and the repentance, giving rise to shadows or double ghosts that confirm the indefinite and strange character of the representation. His palette alternating soft and strident, hot and cold tones, reinforces the tension that emerges while enhancing its artificial, illusory character. These colors confuse our certainties and accentuate the ambiguity of the situations exposed; as ambivalent as are the changing facets of the territory in which Jean Gfeller spent his childhood and from which he draws his inspiration in part.

He thus examines Founex, a village not far from Geneva in Switzerland - a former agricultural land, nestled between lakes and mountains, transformed in a few decades into an affluent place of residence - with the appearance of an idyllic postcard, but whose polished varnish cracks to reveal another reality marked by sordid events linked to marginal or unbalanced people. This more subterranean, almost foggy face hovers in the painter's memory, as in some of his works. It also feeds a visual catalog made up of heterogeneous sources found on the Internet, notably on forums, or taken from films. These pre-existing clichés and the stories they contain are a fertilizing ground of incongruous associations inspiring the compositions transposed on the canvases. In this operation, mixing appropriation, detour, flipping and translation of the language of pixels into that of the pictorial matter, the image is undeniably put in question, even in crisis. The landscapes put in abyme in certain paintings, of which one does not know if they are paintings, posters, or windows, point the illusionist character of the representation. Jean Gfeller's paintings, fed by the media flows that assail us daily, mark pauses that open a reflection on our relationship to the world of images. Resolutely silent, sometimes tinged with irony and in some places cathartic, they invite us to consciously dive into micro-fictions in order to unfold their imaginary. 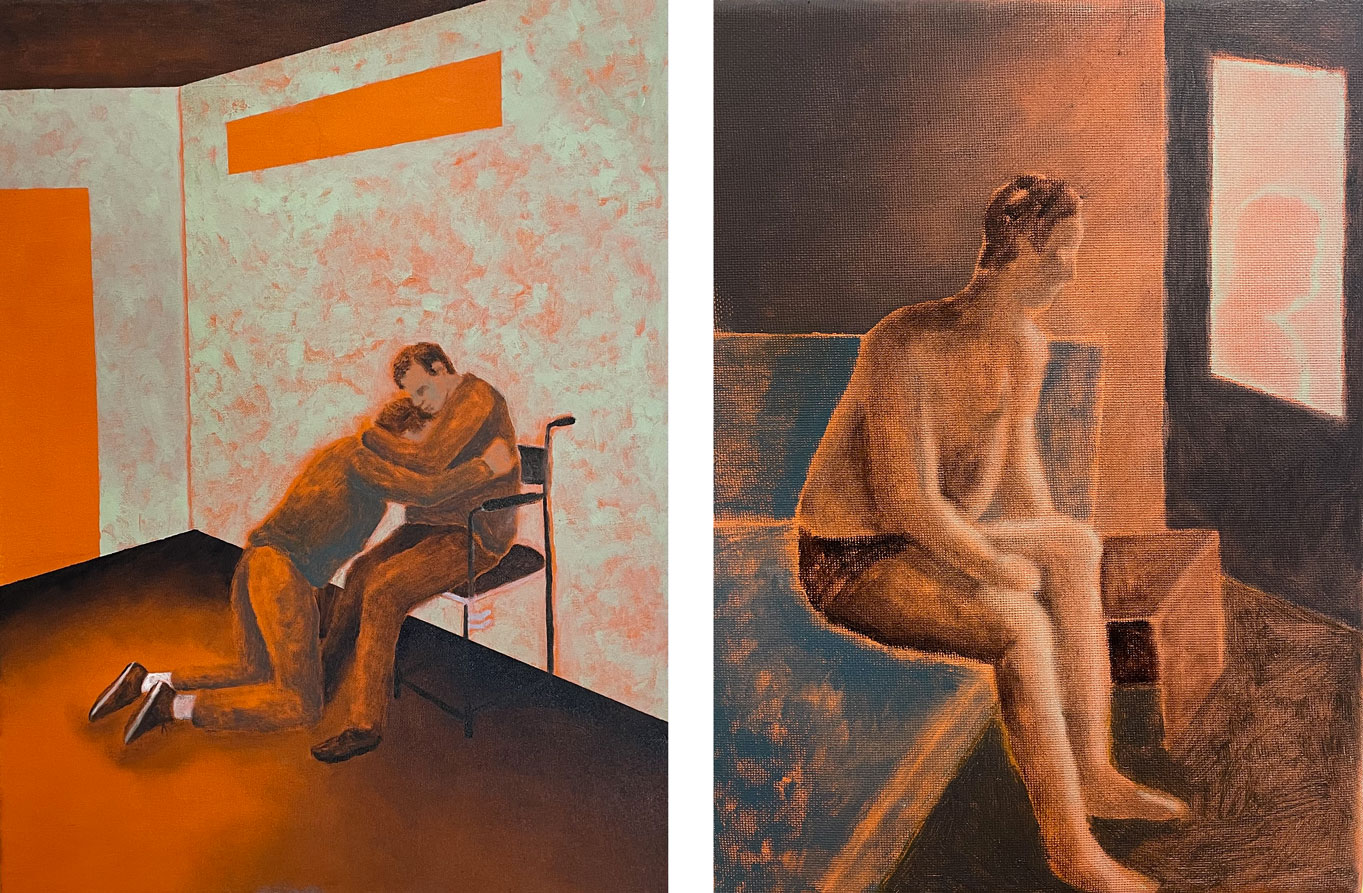 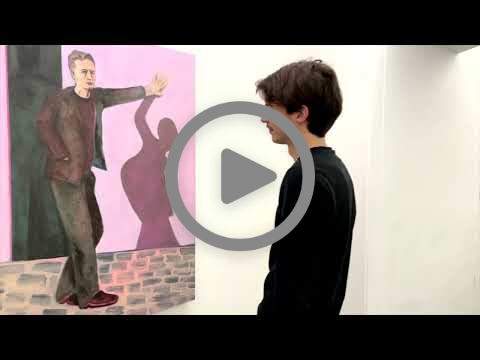 Information:
Jean Gfeller « A neck brace, a weird guy and a landscape poster »
from November, 25th, 2022 to January, 7th, 2023
First personal exhibition with the support of the galleries/exhibition of Centre national des arts plastiques